A house hunter thought she may have entered a nightmare after finding a “giant creepy religious statue” resembling actor Nicolas Cage while browsing a property for sale.

Jess Hogan was looking for accommodation online when she spotted the life-size carved wooden statue of Saint Francis of Assisi looking suspiciously like the Hollywood star in one of the bedrooms of the four-bed house in Poole, Dorset.

The 6ft unexpected guest was hiding in the living room of the house, which is on sale for bids of over £375,000.

The ornate carving shows Saint Francis of Assisi wearing flowing robes, with a rosary hanging from his waist and holding a cross.

The sculpture shows Saint Francis of Assisi wearing flowing robes, with a rosary hanging from his waist and holding a cross 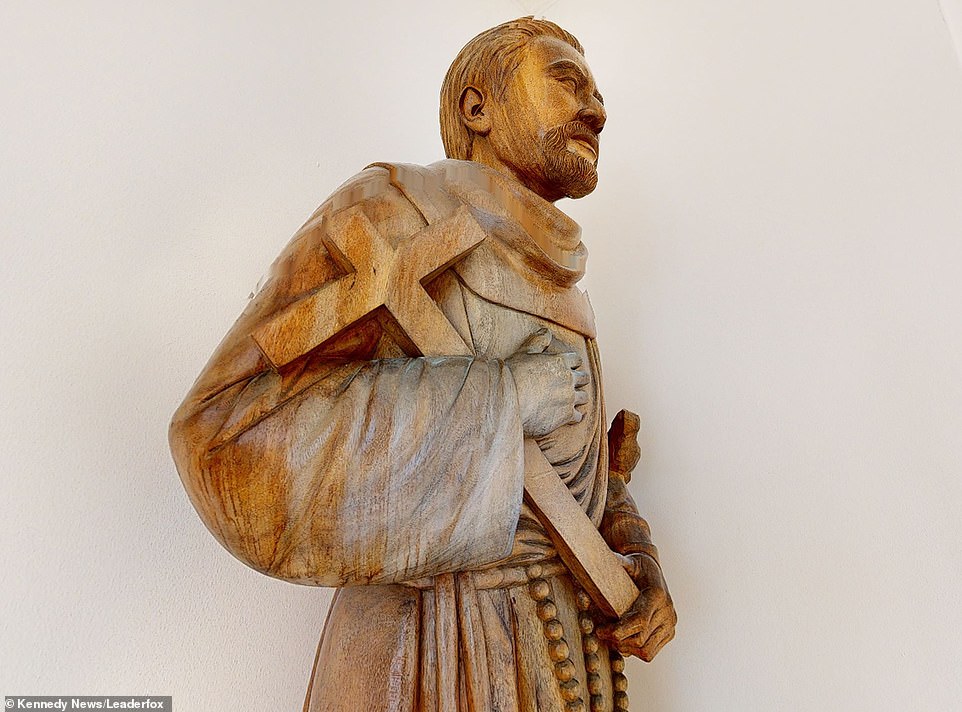 The statue has been in the property for some time, but once had a home in a church in Bournemouth 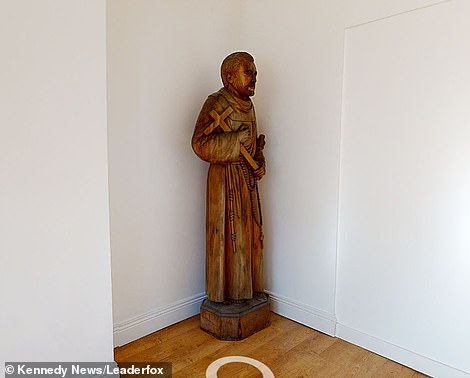 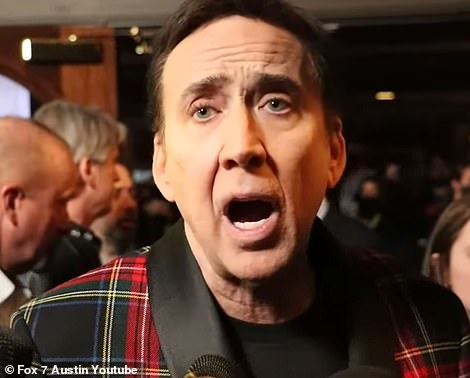 People have compared the statue to Hollywood star Nicolas Cage 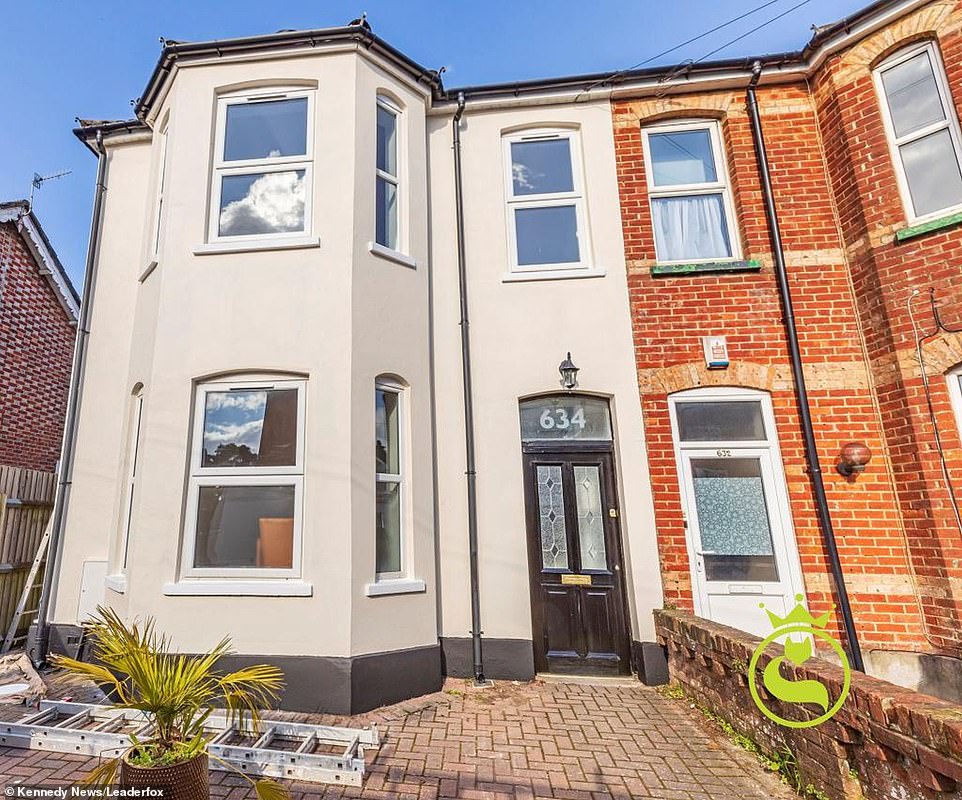 The 6ft unexpected guest was hiding in the living room of the house, which is on sale for bids of over £375,000.

The seller of the property admitted the statue had the ‘shock factor’ and made former house guests ‘jump out of their skins’ when they saw it.

‘It’s a sculpture of Saint Francis – the patron saint of children and animals,” they said.

“We found it in Bali while buying furniture for our salvaged furniture store and sent it back – it was so unusual compared to all the other carvings in Indonesia.

“We don’t know what to do with it anymore, so it ended up in the house. It will be the last thing we move because it weighs around 300 kg.

“We bought it and it took us on a very positive journey afterwards, so definitely more of a good thing in our lives.”

Psychology student Jess, 26, said the discovery “felt like the start of a horror movie”.

“I was looking at houses in this neighborhood and saw this one and looked at the pictures,” she said. “It looked good and I saw there was a virtual tour, so I used it to take a better look around.

“It was a bit of a shock to walk in and see a weird religious statue in one of the rooms – I just thought it was really funny. 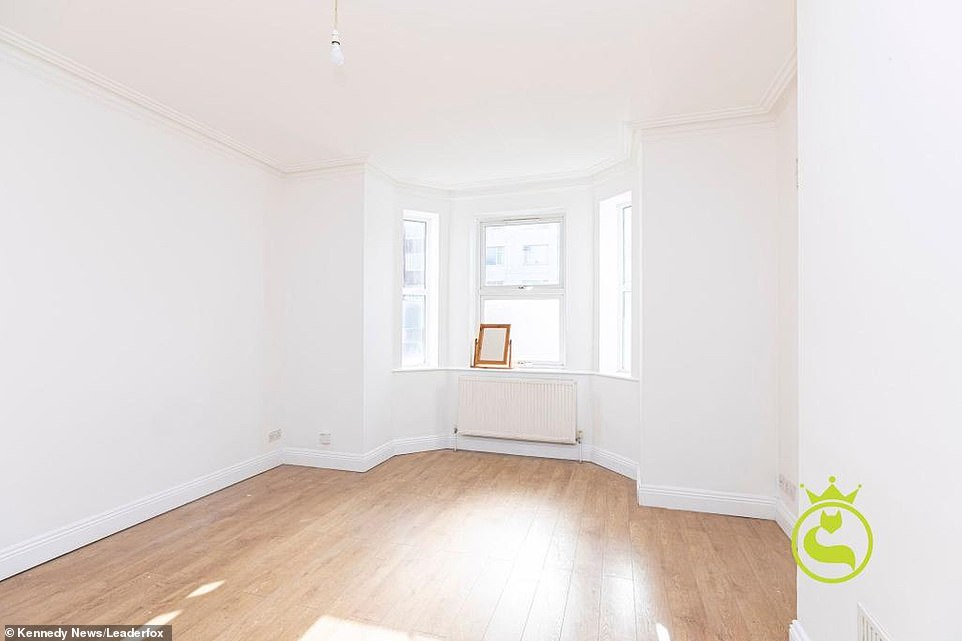 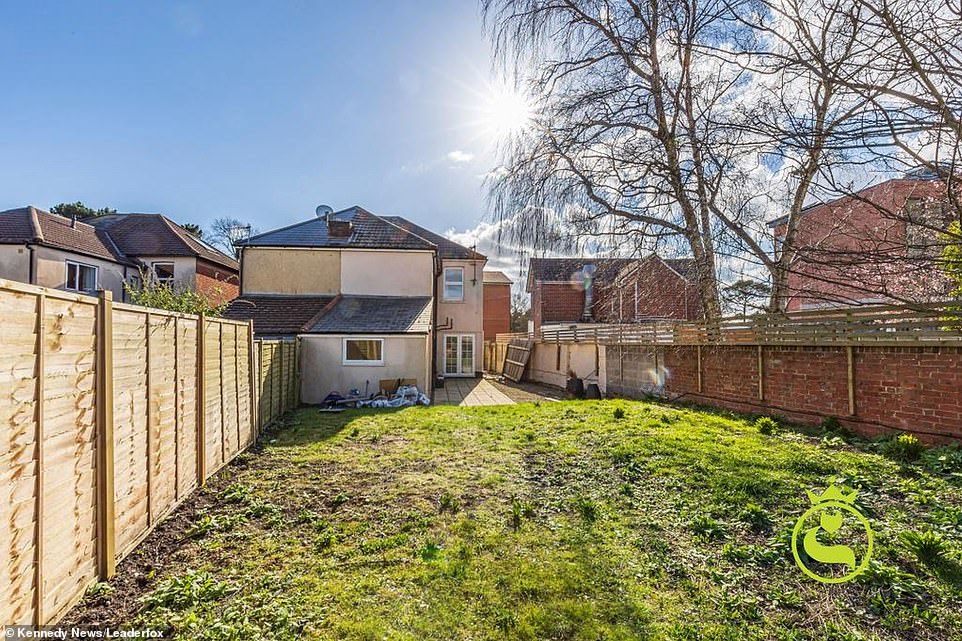 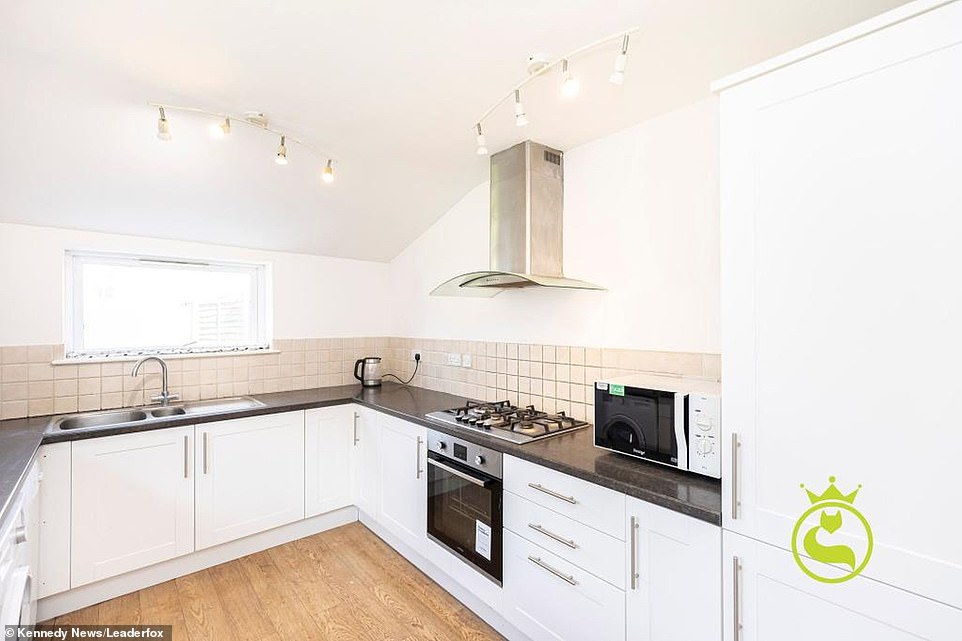 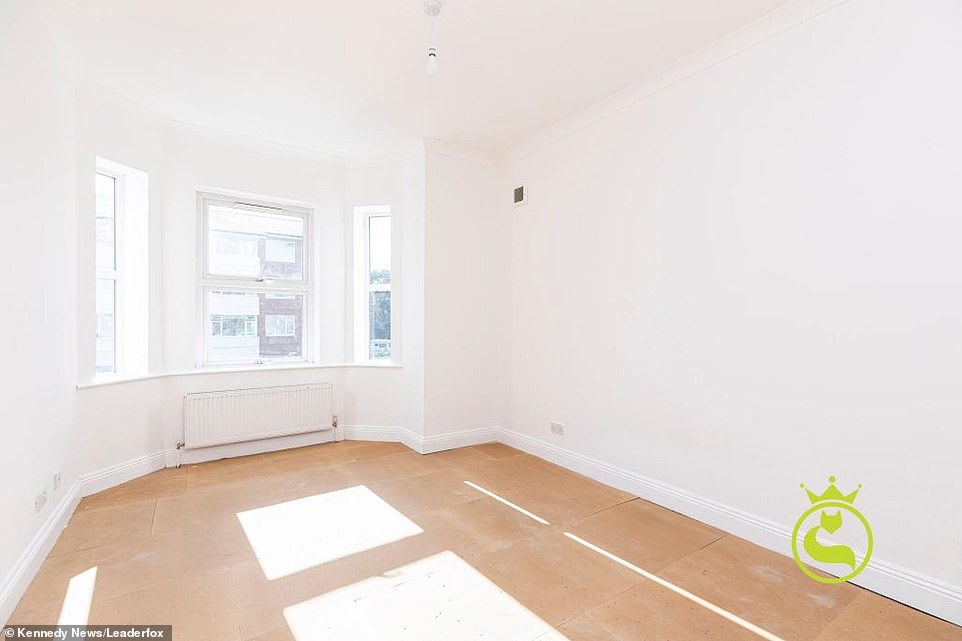 “Because I was doing the virtual tour, it was literally like walking into the room and there was just this thing in the corner.

“It felt a bit like the start of a horror movie – it’s like a warning sign that the house is haunted or that something bad has happened there. It’s almost like it’s the statue’s home and it should stay there – maybe if you move it something bad will happen. It probably comes to life at night.

‘I have no idea why it’s there, it just seemed really out of place. The rest of the house was empty, which made it even stranger. I don’t know why they left that in there or why they didn’t just move it around for the pictures at least.

After meeting the character virtually, Jess tweeted about her strange discovery, writing, “So I was doing a virtual house tour on Rightmove and ‘walked into’ a room and was greeted by this thing. “

His discovery was shocked and horrified by others online, with one saying it reminded them of Doctor Who’s Weeping Angels.

“This thing comes to life 100% at night” and joked that the statue’s crucifix might be a hidden sword,” another wrote.

Others pointed out the uncanny resemblance to Nicolas Cage’s handwriting: “Is Nic Cage??” 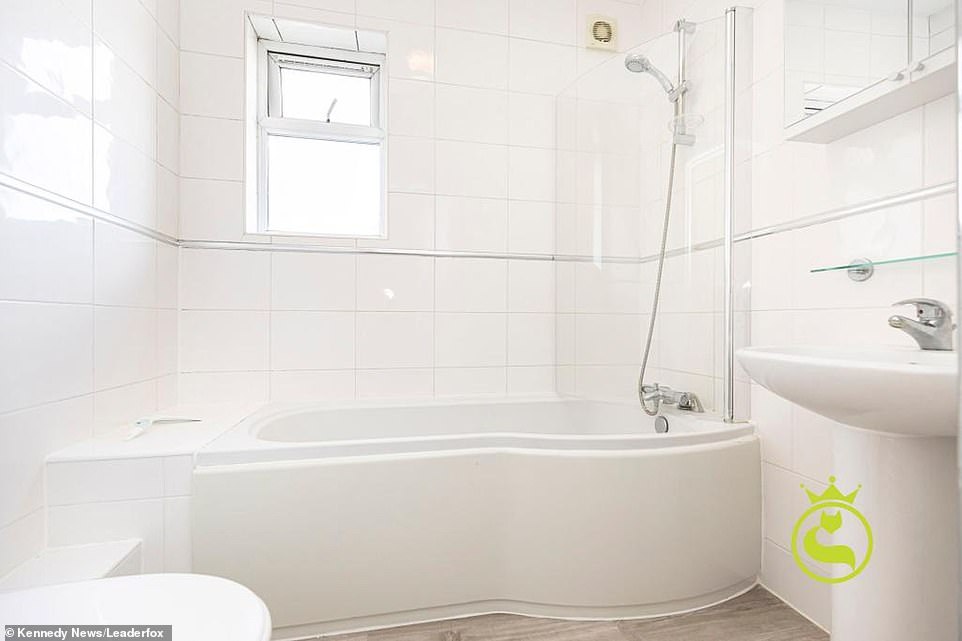 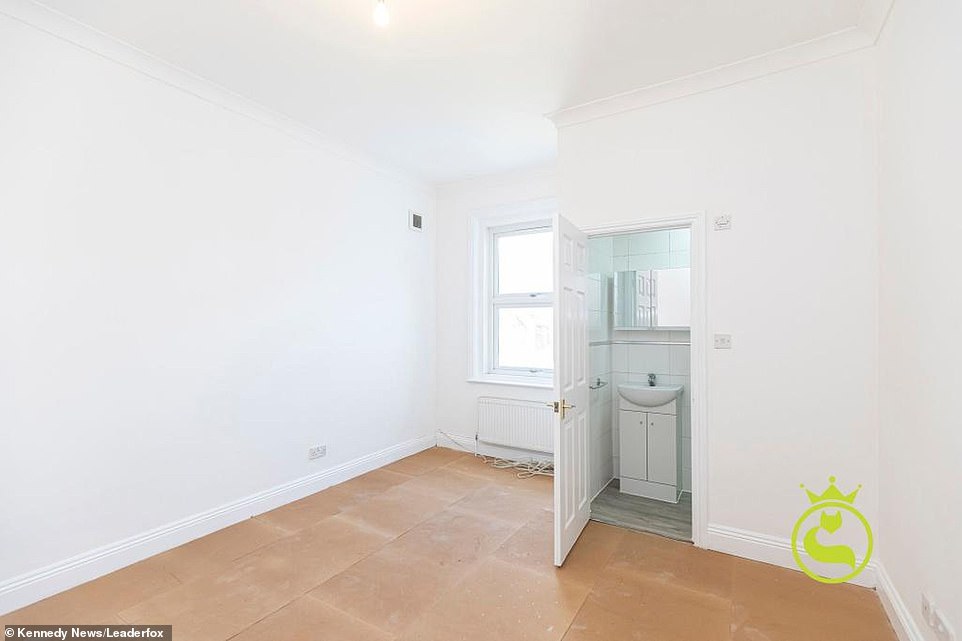 Upstairs, the property has three large bedrooms, one of which is complete with a small adjoining bathroom. 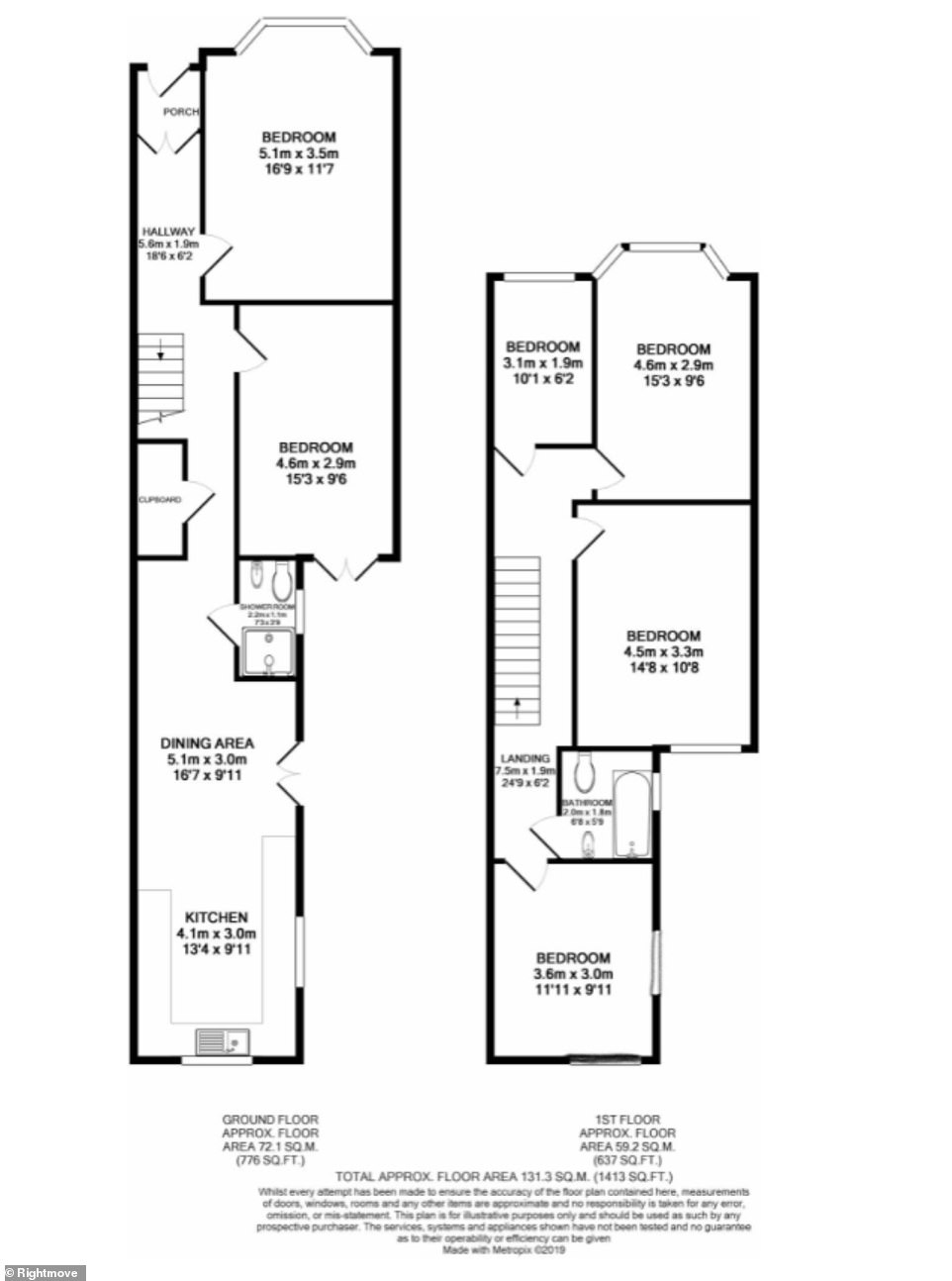 The odd addition to the property isn’t immediately spotted if you scroll through photos online as it’s been overlooked by sellers, but it comes into full view during the 360° tour.

Aside from one potentially unwanted guest, the property has high ceilings and spacious bedrooms, including a living room with an open bay window to the front of the property.

Adjacent to the living room is a dining room with large patio doors opening onto a large private rear garden with a paved patio and grassed area.

Towards the rear of the property is the kitchen and a downstairs shower room.

Upstairs the property has three large bedrooms, one complete with a small en-suite bathroom, a single bedroom and a family bathroom, which are divided by a tiered landing.

The listing notes that the ‘substantial house’ has high ceilings and a ‘spacious feel’, including a living room with an open bay window to the front of the property – the room where the statue is located.

Adjacent to this is a dining room with patio doors which open onto the rear garden and then towards the rear of the property is the kitchen and downstairs shower room.

Upstairs, the three large bedrooms – one of which is ensuite – the single bedroom and the family bathroom are separated by a landing on two levels.